Changing the coarse of a leggy lizard 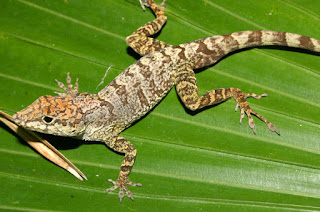 In 2017 an array of hurricanes that hit one after the other hurricane Harvey, then Irma, and Maria, made its impact on not just the weather but also the species that it disrupted. Biologists at Washington university in St. Louis, have released a publication about hurricanes and how it affects lizard population. The biologists had just previously done a survey of the Anolis scriptus (a small bodied common lizard), found in the Turks and Caicos archipelago. When the group came back to Turk and Caicos after the hurricanes that swept through, they discovered their original data (the survey they conducted data) had changed. (1)(2)

When coming back the group of biologists believed that the storm would impact smaller toe sized, smaller body and leg sized lizards, but almost the opposite happened. "The prediction was that if we saw any changes, they would be changes in the features that help lizards hold on -- they would be related to clinging ability... For example, the sticky toe pads on their fingers and toes, maybe they would be larger." said Colin Donihue a postdoctoral fellow at Harvard University. (1)
However, that was not the case when they returned after six weeks. They discovered that Anolis scriptus now had longer fore legs, shorter bones between their hips and knees of their back legs, and had over all smaller bodies. "The observations were statistically significant and consistent at both island sites." (1) This signifying that it is not just a happen stance that this version of the population survived, but that their phenotype was more adaptive to the hurricane.

Johnathan Losos, the William H. Danforth Distinguished Professor at Washington University and professor of biology in Arts and Sciences, said "With regard to evolution, the question is whether hurricanes cause selective mortality: do individuals with certain traits survive better than individuals with different traits? The alternative possibility -- that devastation is so massive that mortality is indiscriminate, not favoring some individuals over others -- is certainly possible." (1)

This is a classic example of how natural disaster occurrences influence certain phenotype's to live on, while others die off. It also shows that during this hurricane and this specific species that this was a natural selection based mortality and not just indiscriminate. Losos Still hypothesizes that even though this is a pretty clear showing on natural selection, there could be other factors involved: "maybe the hurricane blew in lizards with bigger toepads and shorter hindlegs from another island. Or perhaps the act of clinging to the branches in high winds actually caused their forelegs to get longer. We can't rule these possibilities out because this study was the result of serendipity, rather than specifically being designed to test the effect of hurricanes. Still, hurricane-induced natural selection seems like the best explanation for these findings," Losos said. (1)

There was also a pilot study that was conducted that exposed lizards to hurricane-force winds. It was shown through this study that when hurricane- force winds are hurled at a lizard it grasped on to the perch: the ones with longer hindlimbs were more vulnerable to the gusts of wind and pushed off due to their back legs ending up dangling (creating a drag a negative force that was to great to hold on) while the front limbs had to do all the heavy holding. The study showed that to be more hurricane proof for a lizard one needed to have shorter hindlegs and longer forelimbs. This showing more evidence for natural disaster influencing phenotype by natural selection.

Natural disasters are happening more and more frequently due to global warming, and these kinds of research are important for the future and will most likely be an important area of study.