How molecules in cells 'find' one another and organize into structures 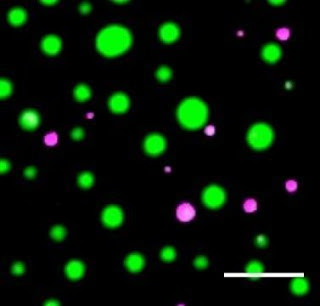 For the first time, a team of researchers shows that RNA molecules can recognize one another to form into the same droplet. This is due to specific 3D shapes that the molecules assume. They worked with fungus cells and colleagues, which showed the RNA molecules ended up in the same droplets, if these 3D structures allow them to bind to one another through base pairing.  They then found out that RNA molecules will end up in different droplets in their secondary 3D structure is shielding any complementarity.  This finding is important because it reveals a selective mechanism for forming these RNA protein condensates.
They still need more evidence; with using fungus researchers believed there should be a liquid-to-liquid phase separation in order for the two different biological processes to occur. But they need more evidence that matters for the cell function. There has also been indication that with these liquid condensates that it should condense to more of a solid state may be a factor in disease such as Parkinson, Huntington’s, and Alzheimer’s.