CRISPR Gene Editing Could Save the Coral Reefs

CRISPR gene editing has been used by scientists to make tweaks in practically any gene in plants and animals. A research study done at Stanford University was able to edit 3 genes in corals growing in The Great Barrier Reef in Australia. Phillip Cleves lead this experiment and he used CRISPR gene edition at the earliest stage of life in corals. Two of these genes used coded for the coloring in corals and the other gene coded for how new corals settle and grow in the reef. The results of this experiment has given scientists a stepping stone to discovering a way to edit the genes of corals to make them resistant to bleaching. Coral bleaching is caused from pollution and the warmer ocean temperatures. This has a major affect on the ocean and the world because bleaching causes the death of corals and all the organisms that depend on coral to live. The study conducted by Phillip Cleves has provided scientists with information to lead them in the direction to change the genes in corals to make them resistant to bleaching. This is a very important study that can hopefully change what pollution is doing to the earth. In my opinion, I think that more people should be aware about how climate change and pollution is affecting our planet. If scientists can figure out what genes are responsible for bleaching and if they are able to insert genes that code of bleaching resistant, a major change can be made in the ocean. 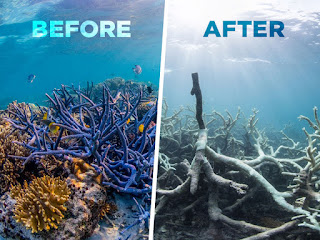