Vampire bats, a blood sucking animal lives deep in the forests of Mexico, Central and South America. Blood is a very hard substance to live on because it is mostly made of protein with very few vitamins, and is riddled with viruses. Organisms that can live on only blood are intriguing to the scientific community especially mammals that can live on it. A bioinformatics researcher, M. Lisandra Zepeda Medonza traveled to vampire bat caves and collected their fecal matter to better understand their genome and microbiome. After collecting samples the researcher compared the genome and microbiome of other species: a fruit eating bat, one that eats insects and one that eats lizards, mice and other small creatures. It was found that vampire bats have differing patterns in their genomes that showcase the power of natural selection and how the bat's unique diet affects their immune system and metabolism. 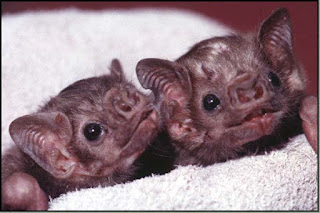 Surprisingly, the vampire bat's genome was not riddled with pieces of viral DNA that would usually insert itself into the DNA of most organisms. Interestingly genes that fight off viruses were found which suggests that vampire bats have adapted to fight off the onslaught of pathogens. The vampire bat's microbiome revealed that bacteria in their gut are focused on metabolic tasks like breaking down the protein and producing vitamins that vampire bats lack otherwise. The study of the vampire bat has given the scientific community a unique look into how creatures with unusual diets function. My hope is that the study of creatures with strange diets will possibly help humans who suffer from gastrointestinal problems.
https://www.nytimes.com/2018/02/22/science/vampire-bats-blood.html
https://www.nationalgeographic.com/animals/mammals/c/common-vampire-bat/
Posted by Unknown at 11:22 PM