U.S. Scientists Sucessfully Use CRISPR to Research a Cure for Genetic Diseases in Human Embryos

The U.S. was not the first scientists to do research with CRISPR to cut DNA to edit the genomes of human embryos. Chinese scientists attempted similar experiments, but not enough embryos were viable after the use of CRISPR for it to be considered successful. These Chinese scientists collaborated with Shoukhrat Mitalipov (Oregon Health and Science University) and other researchers from South Korea to find more successful results to their study. The earliest stage possible of a human embryo is when it is only one cell, at this point is when they added CRISPR. As the embryo developed and cells divided the genetic traits were passed on to all cells. For ethical and legal reasons, the embryos that were used were made for research only and are not capable of developing past three days. The genetic defect in these embryos caused serious heart problems and after the CRISPR cut the DNA of the human embryo and additional genome editing technology was used, successful results were shown and 72% of the embryos had no sign of the genetic defects anymore several days later. This does not mean that tomorrow these procedures will be available to everyone in real human embryos; but it does mean that we are one giant step closer to ending genetic diseases. Many people believe using human embryos is not ethical and should not be done, but what these people do not understand is that the research is being done on specially designed human embryos for research purpose only so they will never have the potential to one day become life. This research needs to continue because it is truly amazing how far we have come with CRISPR considering it was only discovered as a possible way to fix genetic diseases just in 2012. 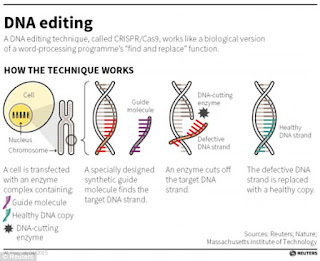