Tiny implants for cells are functional in vivo 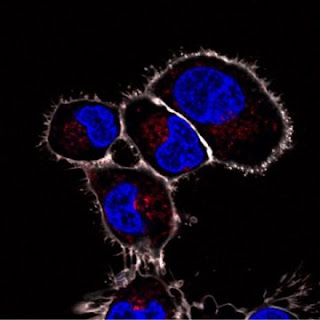 A team from the University of Basel has successfully integrated artificial organelles into the cells of living zebra fish embryos for the FIRST TIME EVER! I this approach they used artificial organelles as cellular implants offering new potential in treating a range of diseases. These cellular implants could carry enzymes, which are able to convert a pharmaceutical ingredient into the active substance. Which then releases it “on demand” under certain conditions. Distributing drugs in this way could reduce the side affects and usage.


These artificial organelles are based on tiny capsules, which form spontaneously in solution from polymers. The artificial organelles presented here contain a peroxidase enzyme. This enzyme only begins to act when specific molecules penetrate the wall of the capsules. To control the way this substance is disbursed through out the cell the researchers chemically modified natural membrane proteins into the wall of the capsules. These proteins will act like gates that open according to the glutathione concentration in the cell. The researches chose zebra fish embryos because they have transparent bodies. Which allow great tracking of the cellular implants under a microscope, when marked with a florescent dye. When they injected the artificial organelles, they were eaten by macrophages, which allowed it to make its way through the organism. The researchers could then show that the peroxidase enzyme that was trapped inside the artificial organelles was activated when hydrogen peroxide produced by the macrophages entered through the protein gates.