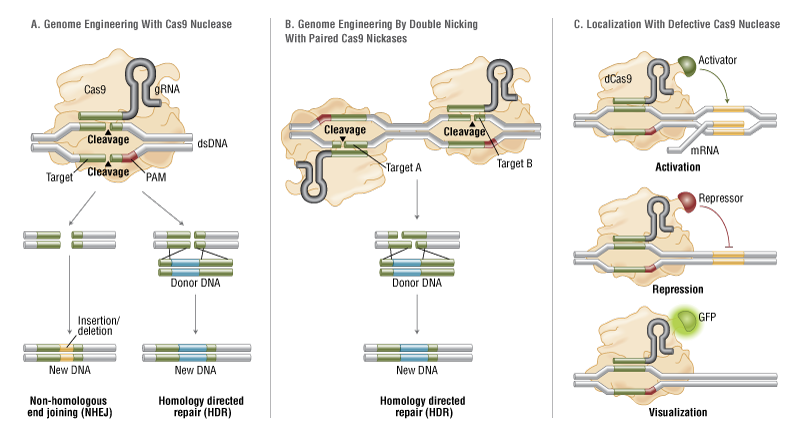 Genome editing also called gene editing is a technique that gives scientist the ability to change an organism's DNA. This method allows genetic material to be added, removed or changed at particular locations in the genome. The most recent method to gene editing is known as CRISPR-cas9 which is an acronym for clustered regularly interspaced short palindromic repeats and CRISPR- associated protein 9. In the summer of 2017 researcher at the Oregon Health and Science University succeeded in modifying a human embryo. In the modification, the team repaired and corrected an inheritable heart condition, passed down by the embryo's father, the study's lone sperm donor. This correction was completed when the embryo replaced the targeted bad gene with a healthy gene from the mother after CRISPR was introduced. If this method is proven to be save and gets FDA approval then this could be the key to prevent transmission of genetic diseases.
The CRISPR was firstly observed from a genome editing system in bacteria. The bacteria obtain small segments of DNA from viruses and use them to create DNA segments known as CRISPR arrays. The CRISPR arrays allowed the bacteria to remember the virus. If the virus attacked again, the bacteria produced RNA segments from CRISPR arrays to target the virus's DNA. Finally the bacteria would use cas9 an enzyme to cut the DNA apart which kills the virus. From this discovery it let scientist to begin developing a system in which CRISPR-cas9 could be used. Eventually, a potential technique which is still in the making was proposed. The scientist created a small piece of RNA containing a sequence that would act similar to the bacteria that would attach to a specific target sequence of DNA in a genome. The modified RNA is used to recognize the DNA sequence and the cas9 enzyme cuts the DNA at the targeted location. Once the DNA is cut the scientists manipulates the DNA by using the cells own repair machinery to add or delete pieces of genetic material or make changes to the DNA by replacing an existing segment with a customized DNA sequence. It is still being determined whether such procedure would be save and if there are any side effects that can develope from gene editing. For now, this technique is only a potential idea that could be used to treat and prevent more complex diseases.