Is Cloning Humans Next?

Chinese scientists at the Chinese Academy of Sciences in Shanghai have made a cloning breakthrough that hasn't been seen since the birth of Dolly the sheep in 1996. Researchers used the same cloning technique that was used to produce Dolly, to create two healthy monkeys. In the past cats, bovines, dogs, polo ponies, and pigs could be produced using cloning, but never before has anything in the primate family been cloned besides embryos. The monkeys created are two macaques, 7 to 8 weeks old, and are named Zhong Zhong and Hua Hua. To create Zhong Zhong and Hua Hua it took 127 eggs and using a monkey fetus; researchers noted they are a long ways away from making this cloning process efficient for primates. 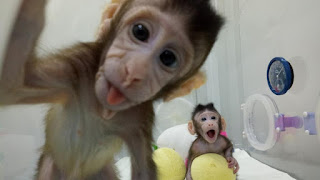 The creation of Zhong Zhong and Hua Hua raise many ethical questions due to that their conception opens up the door for humans to be cloned. The significance of this breakthrough caught the attention of the Vatican's top bioethicists. The Vatican's bioethicists urged that the cloning of the monkeys must only be used for the betterment of humanity. Scientists, law professors and ethicists ranging from institutions such as Michigan State University, Stanford, and Berkeley weighed in the conception of Zhong Zhong and Hua Hua. Many came to the same conclusions that cloning humans was unethical and even one going as far as to say it is "criminal." The chinese scientists who created these monkeys strongly emphasized that their overall goal is to use these monkeys to study diseases such as Parkinson's and Alzheimer's.

Zhong Zhong and Hua Hua open up a door that could allow many breakthroughs in curing diseases and understanding how genetics work. I share a similar opinion with the experts on this one: humans should not be cloned. Many moral conundrums could arise from cloning, chiefly the concern is that people could be created for profit.
http://learn.genetics.utah.edu/content/cloning/whatiscloning/
https://www.nytimes.com/aponline/2018/01/25/science/ap-us-sci-cloned-monkeys.html
Posted by Unknown at 5:48 PM