In biology salamanders have become a model for evolutionary and developmental studies. In this study it focuses on one salamander, which is the Mexican axolotl (Ambystoma mexicanum). They choose this salamander in particular because they are known for their ability to regenerate body parts. If this salamander looses a body part, within weeks the limb will grow back with, muscles, bones, and tissue. To understand regenerate and why it is very limited in most species, scientists need to have access to genome data. In the Axolotl due to their size, there are 32 billion base pairs, which is 10x larger than the human genome.


International team of researchers have now assembled, annotated, and sequenced the complete axolotl genome, which is the largest genome to ever be decoded. They did this using the PacBio-platform, which a sequencing technology that produces long reads to span large repetitive regions. Those who analyzed the assembled genome discovered many features that seem to point uniqueness of the axolotl. It was also discovered that an essential development gene named PAX3 is completely missing from the genome and it function has been taken over by another genome named PAX7. Both of these genes play a key role in muscle and neural development. 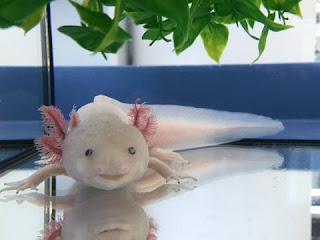