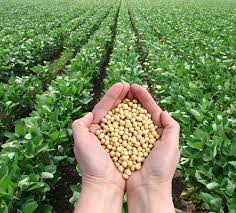 This article was interesting because I never really thought about how farmers were paid for growing their produce.  So choosing a variety that codes for higher yields would make more sense for the farmers to grow.  With the knowledge to grow soybeans with high protein as well as high yield would mean the animal feed has more nutrition in it and can help the animals grow better without the use of other alternatives of making the animals grow quicker.
Posted by bkonzelmann at 7:08 PM