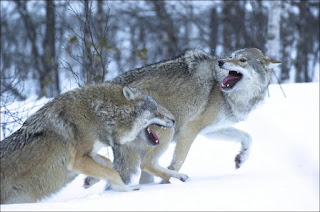 A study published in Science Daily describes the full genetic effects of intense inbreeding within a threatened species. The Scandinavian Wolf population was originally started in the 1980's with only two animals. The species grew, but it still incredibly threatened and populations are still low. Due to this low population, inbreeding is incredibly common. The research, which was conducted by Uppsala University, sequenced the entire genome of 100 wolves, and showed how incredibly inbred the species is.

Inbreeding, as we know, lowers the overall genetic diversity within a species. Genetic diversity is key in survival of a species, especially those with low populations and species that are endangered. Efforts have been put forth towards diversifying and protecting these wolf populations, however biology is working against the scientists. Disease or some other mutation could easily run through the small population and destroy it very quickly, where otherwise it could not. I think this study is great in showing us the problems with these wolves, however unfortunately there is no simple solution towards fixing the problem and regrowing the population. This gives great insight into the problem, but no solutions.
Posted by Daniel Schneider at 1:22 PM