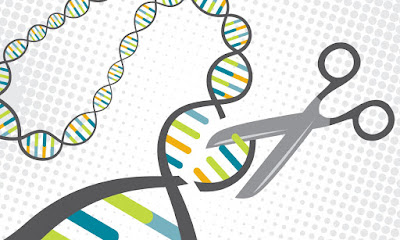 CRISPR is a relatively new technique for genome engineering that targets certain parts of genes and edits DNA in very precise locations. CRISPR uses RNA molecules (crRNAs) and enzymes (specifically Cas9) that bind to DNA and "cuts" it at a precise location in order to turn off the gene that was once activated. Scientists have been in the works of trying to figure out how to use CRISPR for curing diseases and for creating better crops, however there has not been much luck with it. While trialing the effects of CRISPR on an invasive species, it ended up completely wiping out other species. According to the article, scientists are calling CRISPR an invasive species, because it turns out that the altered genes were spreading from the invasive species to other parts of the ecosystem. Since this has become an issue, scientists are looking for other ways to help endangered species, that are not as risky. With that being said, scientists have determined that CRISPR is not safe to use within the environment as of today. Despite this, it is possible for CRISPR to become a way to eradicate diseases such as malaria, because it might be possible to cause genes to "self destruct" on themselves after they are genetically engineered with CRISPR. These self-destructed genes would then die off after several generations, but it would spread very quickly, and the genes that cause malaria would not be there anymore.
I am very interested in genetic engineering and how it is quickly evolving. I think that this field of study is very important because there is a possibility that we will be able to cure or eradicate diseases that have been a problem for our species for generations. CRISPR is a brand new technique for genetic engineering, and it is going to take a long time for it to become a proper technique that can be used within the environment and regularly for humans. Like how the article suggests, I think that we should come up with safer techniques that are not as likely to cause massive problems within the genomes of species including our own. I think that this is a great step in the right direction for scientists to figure out a way to wipe out diseases, but I think that within time we will be able to find an even better technique.
Posted by Unknown at 12:31 AM