Fathers pass on four times as many genetic mutations 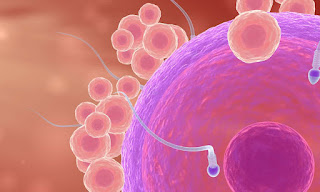 According to the science section in The Guardian, children inherit four times many new mutations from their fathers than their mothers. Researchers in Iceland also suggest from their research that the faults in the men's DNA are the driver for rare childhood diseases. In the article it also states children born to older fathers have a greater risk of developing certain disorders like intellectual disabilities, and as well as autism and schizophrenia. This is more likely to happen because gene are  more active in the brain than other organ in the body. Men pass on more mutation because they make more sperm throughout their lives live which does not perfect copy of DNA. It also states in the article that in some parts of the genome, new mutations were passed on from mother abruptly. When these mutations occur it causes the chromosome to break in two and patches back in leaving the mutations to be a genetic scar.  A quote from a professor  stated that for many years it was known that the risk of having a child with a medical condition was to occur increasingly with the father' age. That is why there an age for a upper age limit for sperm donors because simply the genetic quality of sperm from younger men is much better in the terms of new mutations than older men. I found this very interesting because I would not have thought not only women are the factors for rare childhood diseases in children but also fathers make a great deal of contribution it had never came across my mind until I had read this article the fact that age makes an difference too really had shocked I would not have thought that made a difference in medical conditions when having a child.