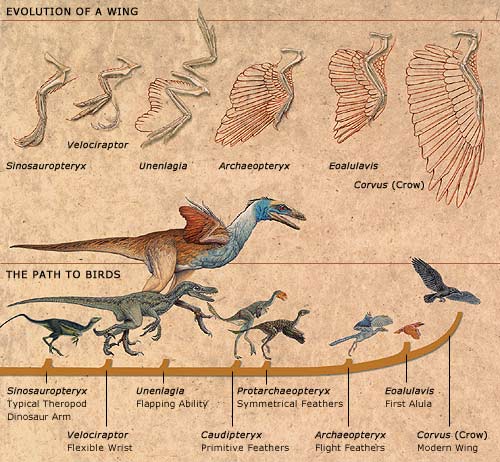 Archaeopteryx; a very early prehistoric bird, dating back 150 million years ago during the Jurassic period, it is one of the oldest-known birds. Based on bone structure it looked to be part bird and part dinosaur. Unlike modern-day birds, it had teeth, three claws on each wing, a flat sternum, belly ribs, and a long, bony tail. However, like modern-day birds, it had feathers, a lightly-built body with hollow bones, a wishbone and reduced fingers. This animal may have been able to fly but if so not very far and not very well. Scientists took a look at dinosaur brains to trace this hyperinflation and they found that Archaeopteryx’s brain fell in between that of distantly related theropods, such as Tyrannosaurus rex, and living birds.

I find this extremely interesting because birds may not be the smartest of all creatures but there are a variety of species of birds, each with it's own story. No matter where you go in the world you will always come across some type of bird, they fill the Earth and are able to live in any environment.