Your Roommate's Genes Can Effect Your Health

As college students, a lot of us are residents on campus living with a few roommates.  What we may not realize, though, is that the people we live with may influence our health based on each individual's genetic makeup.  In a very recent study, researchers observed the behaviors of mice, focusing on how one affects the other in a number of ways based on genetic traits relating to things such as growth, the immune system, and biological clock.  Specific pairs of mice either affected each other in a more positive way, a more negative way, or remained neutral depending on which type of mouse was caged with another.  Right now, scientists have found about 40 traits that can be effected, while 10% of a mouse's genetics are influenced by another.  Some traits tested in studies were anxiety level, rate of wounds healing, weight, and functioning of the immune system.  In newer studies focusing on traits related to the immune system, more than 30% influenced on how genes were expressed.   For a long time researchers have known that a person's traits can influence one another's behavior through peer pressure. One example a researcher stated involved a difference in roommates' biological clocks, where one tends to wake up early and the other goes to sleep late.  This could lead to poor sleep habits to one person or the other depending on who's behavior changes. 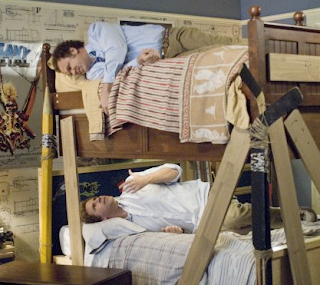 I thought this study would spark a lot of interest considering many of us probably live with roommate's on campus, experiencing changes in behavior due to the people surrounding them.  I have even noticed a change in my own behavior pertaining to my sleep schedule and how my roommates disturb it, so it would be interesting to see what other ways their genetic traits can effect mine.
Posted by Unknown at 4:35 PM