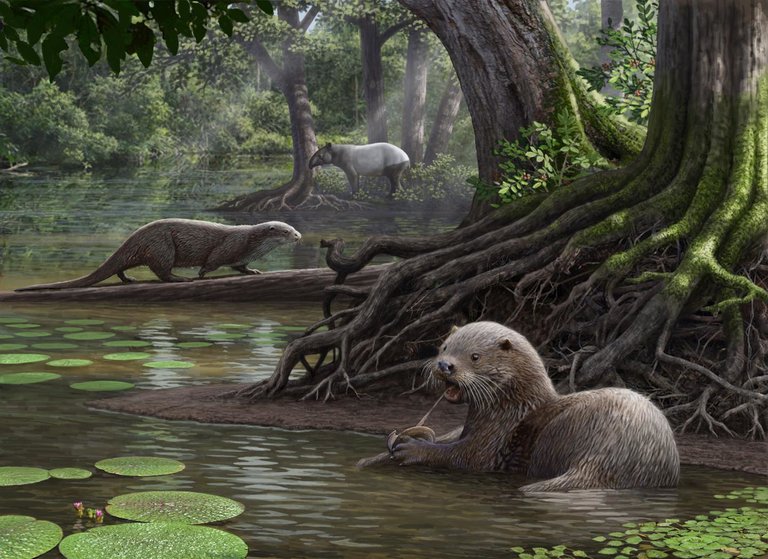 The present otter has evolved tremendously over the past 6 million years. When people think of otters, they think of cute, little furry animals that play in the water, but if we could time travel back 6 millions years ago, people would surely stay away from the otter's fearsome attributes. Researchers of the newly discovered extinct otter believe it to be around 6 feet long, with strong jaws, and weighing about 110 pounds. The otter fossils resemble current wolves and the name of the extinct otter is Siamogale melilutra. Researchers performed a CT scan on the large skull, and digitally reconstructed it to figure out the body proportions. The next step is to find out how strong the jaw really was, because of the various advantages or disadvantages the otters may have had in that earlier time.

This was a fascinating article to read. I have always thought of otters being small, little fur-balls in the water. The North American Otter today is under 4 feet and roughly 11-30 pounds. Learning that they were the size of wolves was interesting because I wonder what caused them to lose their large physiques over time. Maybe the largeness of their jaws created a hindrance on eating small mollusks or other shell fish, like otters do today. Another possibility of why the present otter is smaller, could be related to the swiftness and agility the otter has, compared to the bulkiness of its past size. Natural selection must have played a role in keeping the smaller-sized generations of otters because they were the best of fit.
Posted by Unknown at 1:59 PM