Why is left handedness so puzzling? It only accounts for 12% of the world's population. Yet, so many famous people have been left handed as well as five out of our last seven presidents to Einstein to the first man on the moon. What is it, genetically speaking, about left handedness, that explains this phenomenon?

To begin, the left handed origins have been observed in Neanderthals. Scientists studied the grooves in their teeth from them scratches they made while carving their food up and found that one in every ten Neanderthal scratched their teeth towards the left side. This can give us some insight as to how long the genes have influenced left handedness. However, scientists still do not understand what genes and how many are in play to cause left handedness.

We do have a clue as to how it affects left handed people, however. Left handedness and intelligence seem to go hand in hand. Left handers disproportionately make up the small amount of people with a genius iq. For example, twenty percent of Mensa members (society where one must have a high iq) are left handed. For only about ten percent of left handed people making up the population, this is an interesting fact. There are some drawbacks to being left handed, however. 40% of schizophrenic people are left handed. Scientists believe this happens to left handed people who have equal access to both sides of the brain. This can cause complex messages to the brain that can result in misconnections in neural networks and thus causing the symptoms of schizophrenia. The science is not in on this yet, however. 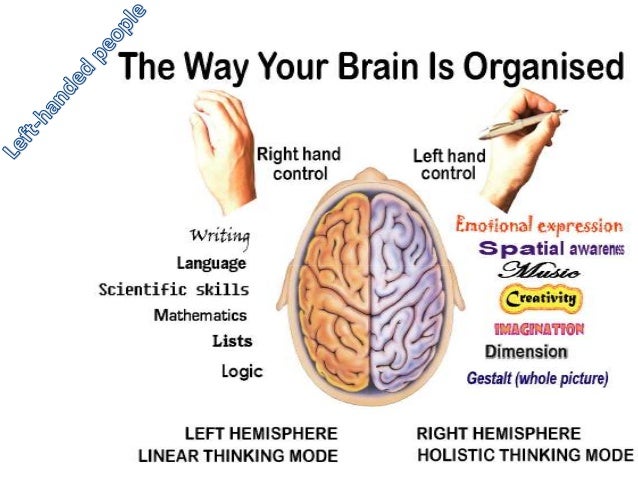 One thing is for sure. Left handedness should be studied more and understood. Many household names are left handed people that changed the world with their way of thinking. Science could have a breakthrough if they can understand how schizophrenia develops by studying the biological markers in left handed people. In any case, the left handed people are an important anomaly to understand, and essential in shaping our music, politics, and technology.

http://healthland.time.com/2013/11/01/the-connection-between-left-handedness-and-schizophrenia/
Posted by Unknown at 9:39 AM