Scientists at Carnegie Mellon University and Yale University have developed a new gene editing system, consisting of synthetic, biocompatible nucleotide technology, that has cured a genetic blood disorder in living mice. The new technology, pioneered at Carnegie Mellon's Center for Nucleic Acids Science and Technology (CNAST), relies on peptide nucleic acid (PNA) molecules. Unlike the CRISPR/Cas9 gene-editing technique, this new synthetic nucleotide technology can be administered to living animals and it also significantly decreases unwanted, off-target, gene mutations. The PNA’s are fitted inside an FDA-approved nanoparticle delivery system for transportation. According to the researchers, the chemistry behind the design of the PNA molecule is innovative because it makes the PNA water-soluble and biocompatible, which means that it doesn't bind to proteins and other biomolecules in a non-specific manner, and the distinct stereochemistry of the synthetic molecule also makes it bind to DNA more easily.

The findings of this study, published in Nature Communications, are said to offer a new approach to treat genetic diseases targeting genes in hematopoietic stem cells. In their study, the researchers targeted the gene for beta-thalassemia, a blood disorder that reduces the production of hemoglobin. Beta-thalassemia is a common target for gene editing because the disease results from defective blood cells. It seems that the PNA system “tricks” the cell's normal repair machinery into chemically altering the bad gene. This is different from other gene editing strategies, (CRISPR), which involve adding an active enzyme into the cell from the outside. 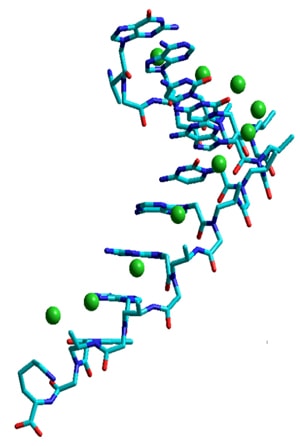 "We have developed a system that uses FDA-approved nanoparticles to deliver our PNA molecule along with a donor DNA to repair a malfunctioning gene in living mice. This has not been achieved with CRISPR," said Danith Ly, professor of chemistry in Carnegie Mellon's Mellon College of Science and an expert in PNA chemistry.

CRISPR/Cas9-mediated genome editing relies on enzymes to cleave open the DNA at a target site, and it uses the cell's normal repair machinery to repair the gene. Using CRISPR, it is difficult to administer large enzymes directly to living animals, and once the enzyme is inside a cell, the enzyme may indiscriminately cut DNA at nontarget sites. As I understand it, the reliance on the enzyme and native repair systems is what leads to different efficiencies of CRISPR/Cas9 in different cell types and organisms.

The newly designed PNA molecule is designed to cleave the double-stranded DNA molecule and bind near the target site in a highly specific manner without cutting anything. PNA, "peptide nucleic acid", is a molecule with the same bases as DNA and RNA, but instead of the sugar-phosphate backbone of natural nucleic acids, the molecule has a peptide backbone, similar to proteins. This means the molecule can base-pair with standard nucleic acids, but has other properties that allow it to carry out different functions. Most notably, PNA can form triple-helix interactions with DNA, which seems to be linked to its role in gene-editing.

The lack of provided enzyme to carry out the biochemistry of this innovative gene editing technique is the really remarkable thing about this study. Gene editing as a whole has been attached to the name "CRISPR", which is only one method for gene editing, although by far the most successful.  There has been so much CRISPR-related research recently, that the fact that this gene editing technique isn’t CRISPR is noteworthy.  More proof of concept will be important before taking the new synthetic gene editing technology to patients, and if proven effective, the earliest human application of this type of technology would definitely be about a decade or more away. I think it’s awesome though, that “nanoparticle delivery”-systems are currently being developed, and it’ll be interesting to see how synthetic biocompatible techniques will shape our current understanding of the genome.
Posted by DAVID at 12:51 PM