Animal communication is a topic that still baffles many, and bat communication consisting of: calls, chirps, and shrieks specifically are still a mystery to humans. The project that was taken underway to further understand bat communication was titled Bat 1K and will involve sequencing the genome of more than 1,000 different bat species. The project was just recently announced with the hope of also gaining a deeper understanding of bats' abilities to fly at night using echolocation, their longevity and long life-spans, as well as relatively strong immune systems. Their immune systems are so strong in fact, that some are capable of resisting the Ebola virus.

Unlike many animals whose genes are better understood, bat genes have barely been studied in comparison to other mammals. Different bat behaviors have been observed including: chattering, screeches, whistles, and barks and it's even been identified that certain species of juvenile bats learn songs from elder male bats, who teach them to apply the behaviors during the search for food, mating, and defending their territory, but the reason as to why and how, is unclear. 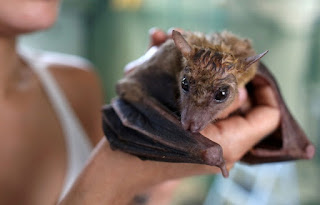 The gene that has been correlated to speech and communication in bats has been identified as FOXP2. It is a gene involving how humans learn languages and how songbirds learn vocal patterns, but the gene has evolved and is more diverse in bats, which remains an unanswered question. Researchers hope to find other genes that are involved in bat communication, as well as other species of bats that exhibit this capacity.

I believe that this research is essential for a better understanding of the many vital bat species, their purpose, and finding a way to eradicate the negative stigmas that the bats carry. Not only would understanding the behavior and communication of bats be in their best interest, but the research may open doors to understanding other species' communication pathways and the genes involved.