Since 1996 Tasmanian Devils have been showing a steep population decline due to cancer. The cancer causes infectious tumors to form on the devils faces and mouths. These tumors then cause the cancer to spread to other members of the population by contact through biting. Not only is the disease extremely infectious, spreading to all the known Tasmanian Devil populations in Tasmania, it is also very deadly. The tumors would cause so much disfigurement in their faces that they become unable to eat and eventually die of starvation. Over the course of 26 years 80% of the original population has declined sending the Tasmania on a sure path to extinction. 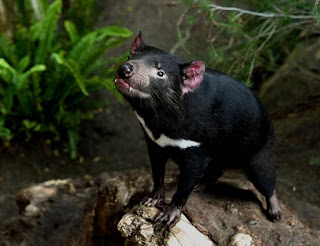 However, it has recently been discovered that this may not be the case. Studies show that there are signs of genetic variation present in Tasmanian Devils making them resistant to the cancer. They collected the genomes of over 296 individuals from 26 years ago and compared them to the genomes collected from current populations and discovered that they are differences between the two in several different genes. It was then discovered that two of the genes exhibiting change are related to immune function or cancer risk. This supports the idea that Tasmanian devils are evolving in a way that increases resistance against this cancer, and because this change is occurring so rapidly, within 6 generations, it points to the variation being a trait already present in individuals that is just now becoming more common as it provides benefits against a recent outside stimuli.


This is a very exciting turn of events, as it seemed that there was little hope for these iconic mammals. Being able to see genetic variation at work in such a short amount of time is a pretty rare thing, and I look forward to hearing more about the Tasmanian devils in the future.

http://www.nytimes.com/2016/09/02/science/tasmanian-devils-cancer-immunity.html?rref=collection%2Fcolumn%2Ftrilobites&action=click&contentCollection=science&region=stream&module=stream_unit&version=latest&contentPlacement=14&pgtype=collection
Posted by Unknown at 1:30 PM