Scientists from Hebrew University of Jerusalem were perplexed when they found that a specific research mouse model who had a mutation in the tumor suppressor gene p53, was oddly more cancer-prone post mutation. There was low-grade inflammation in the mouse's epithelial tissue (skin/blanket of cells covering the body with different shapes). Due to this inflammation, scientists treated it with non steroidal anti-inflammatories (NSAID), which as a result reduced its risk of cancer. For more in depth answers, Israeli researchers turned to University of California San Francisco's Dvir Aran, one of the contributors to the scientific paper,"Widespread parainflammation in human cancer". Aran and his colleagues worked alongside the researchers in Israel to piece the puzzle together. 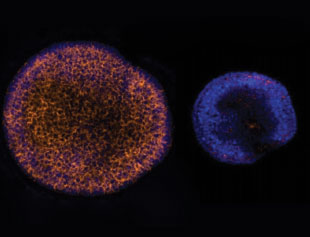 With gene expression data collected, scientists found that four cancers had mutations of the p53 gene with higher parainflammation (PI) scores. These specific cancer types had poor prognoses meaning that PI could possibly speed up cancers.The new team found that there was an increased cellular response of 40 genes. This then led them to analyze data from about 800 human cancer cell lines, 6,500 tumor samples, and 18 different cancer types to see if any had this inflammatory response.

The NSAIDs were used to treat the mouse adenoidal organoids and two human cancer cell lines while expression of PI genes decreased by more than half, suggesting that this could help identify who could be treated with the NSAIDs, making scientists one step closer to finishing the puzzle.

http://www.the-scientist.com/?articles.view/articleNo/47100/title/Some-Human-Cancers-Exhibit-Low-grade-Inflammation/
Posted by Unknown at 9:48 PM