Have you ever ridden on a horse and the ride was just really “bumpy?” Chances are the horse you were riding on did not have the DMRT3 gene, otherwise known as the “gaitkeeper” gene.
Horses have long been a way in which human beings have been able to travel far distances. During the early centuries of mankind, horses were mostly used for transportation as well as a “vehicle” for riding into battle. Today, horses are prize animals showcased in equestrian competitions and the Olympics. Interestingly enough, there is one thing that you might not be able to see in Olympic competing horses: ambling. Why is that? The answer: Genes.
There is a certain breed of horses that are known to be able to amble, which is a type of gait that is not as fast as a gallop but faster than a walk which provides riders with a much smoother ride (See video for ambling). Evolutionary geneticist Arne Ludwig and others from the Institute for Zoo and Wildlife Research in Berlin analyzed DNA from the remains of 90 horses some of which dating back to the 9th century. They discovered that some of these horses contained this “gaitkeeper” gene which allowed horses to amble smoothly over long distances. This gene mutation was also found in early Icelandic horses but interestingly enough, not in any other horse remains found from the same time period in mainland Europe. The gene mutation DMRT3 has been viewed by researchers as a controller of the expression of genes in neurons that coordinate muscle movement allowing for the horses to amble. 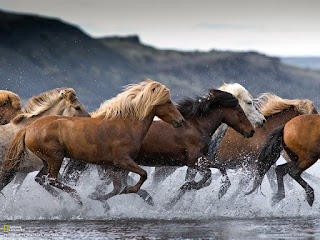 Although just a theory, it is believed that the Vikings were the ones to first use these ambling horses and began to introduce them into the trading market of the 9th century as far as the Middle East and Caspian Sea. With that in mind, the introduction of ambling horses for transportation revolutionized journeys over long distances for humans. Not only did these ambling horses make traveling smoother, it also allowed travelers to journey longer without having to stop to rest from the “bumpy” ride of horses without the DMRT3 gene, making trips much faster. To this day, there are many breeds of horses that contain the DMRT3 gene. So the next time you want to go horse-back riding, get a genetic sequence of the horses to find the ones that will provide you with a smooth ride.