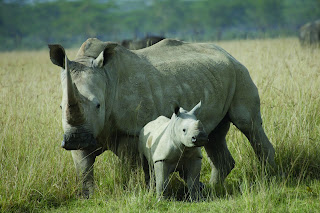 The White Rhinoceros is in immediate danger of going extinct.  There are only three individuals of this species left on the planet.  In an attempt to try and keep the white rhino from disappearing, scientists are working together and using cellular techniques to save them.  Of the existing rhinos, they are no longer able to breed naturally.   What these experts are doing is basically creating lab-grown embryos from frozen genetic tissue and harvesting them into surrogate mothers.  An issue could arise while trying to get the embryo harvested; considering no one has ever done it before and the rhino is said to have a highly convoluted and impenetrable cervix.

Some people are against this and think that more money should be used to prevent poachers from driving the animals to extinction.  That's a good idea, except this could lead to other possibilities of saving endangered species where preventing poachers isn't an issue.  Some people fail to take into account that they are driving other species to extinction, assuming they all have very large carbon footprints.  I personally am very excited to hear how this experiment goes.  It would be incredible to know they have the ability to save a species from extinction and also making advances in reproductive technology. So many other advances in science will be made possible if this works smoothly!
Posted by Unknown at 10:15 PM