Researchers from institutes in China, the Netherlands, and the UK are looking into whether genetics plays a role in looking young. This research may shed light on why some people age better than others and if there is a genetic component that is linked. At first researchers wanted to determine whether the genetic code was responsible for age spots and damage by sun exposure, but they have since turned their attention to perceived age. It is known that the MC1R gene is responsible for resisting some of the affects of UV exposure and these researchers wanted to find out whether this gene had something to do with UV protection. It has been postulated that some people have more protection from UV radiation and therefor appear to be younger than they actually are. Not only is MC1R linked with UV protection, but is also linked with red hair and pale skin. In the Netherlands, scientists compiled 2700 photos and had individuals analyze them and estimate how old the person in the photo was. Researchers found that people with both copies of a mutated MC1R gene appeared to be two years older than those with one or no copies of a mutated MC1R gene. The MC1R gene is also involved in red hair and pale skin as it codes for pigmentation of skin in humans. From the study, it was also found that people overestimated the age of women more so than men meaning that bias could be playing a role in the determination of age. 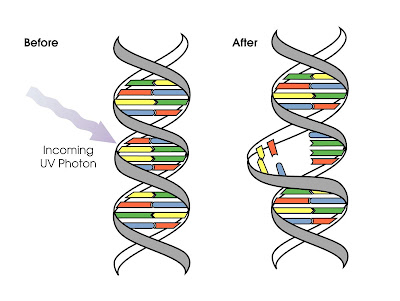 The MC1R gene may also make you look older because having the gene is thought to be responsible for affects in facial structure, more specifically, the height of the lips, creases in the corner of the mouth and others located below the nose. Companies like Unilever are interested in these results because they believe that if a gene that attributes to aging can be found, they want to try and make "anti aging" products that take advantage of the MRC1 gene, as it is also involved in "DNA repair in the skin." These results may be influenced from the fact that pale skin may make someone look younger, or this gene could actually allow for more UV protection. UV radiation from the sun does affects skin especially overtime and does attribute to changes in the skin. With better protection, some people may appear to be younger than they actually are. When researchers looked at mutations on the MC1R gene, they did not consider that the health of the individual could play a role in perceived age, and this could ultimately make the data less useful. I believe that the data gathered from this experiment along with the way in which it was carried out seems to be too subjective. Also the data does not seem to be substantial enough to conclusively say that the MC1R gene is in fact responsible for an increase in perceived age.