You Look Meow-velous in that Tuxedo 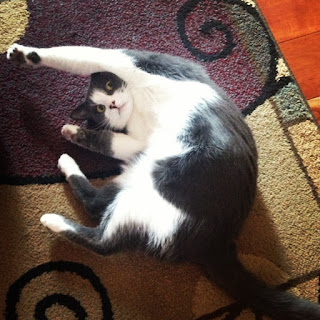 To own a cat is to love one. These mysterious, beautiful, and arguably domesticated mammals have graced humans with their presence since as far back as 7500 BC. Although now, like dogs, there are many different breeds of cats, one ever-popular and recognizable appearance is the “tuxedo” cat. Cats with black/grey fur marked with white patches in this way are known as piebald. Piebaldism, caused by a mutation in the KIT gene, is also common in dogs, cows, horses and deer. However, it rarely occurs in humans.

Researchers at Oxford have been working on figuring out how these animals get their distinctive pattern. And it turns out that the mechanism for these patterns formations is far more random than originally believed.

Animals acquire piebaldism patterns when they are still developing embryos. Piebaldism arises when the precursors of pigment-producing cells spread incorrectly through the embryo. In normal development, pigment cells start near the back of the embryo and spread through its developing skin to the belly, the furthest point from where they started. As the cells spread they also multiply, creating more cells, some of which are left behind to ensure all the skin is pigmented. However, with piebaldism, the dark-colored pigment cells don’t make it as far as the belly in time to pigment the hair and skin. This results in distinctive white patches of fur and skin, usually around the belly of the animal.

Unlike what was previously believed, this study uncovered that cells in piebald animals migrate faster than in “normal” animals, but they do not divide as often. This leaves not enough cells to pigment all the areas of the developing embryo, hence the white bellies and faces. Using a mathematical model, these scientists were also able to demonstrate that pigment cells migrate randomly.

This mathematical model created for this experiment has potential to be used to investigate other embryonic cell division, which can lead to many cancers and other debilitating diseases in humans such as Hirschsprung disease, Waardenburg syndrome and congenital central hypoventilation syndrome (CCHS).

Although I am not a math wizard (unlike my sister), there is no arguing that utilizing a mathematical model can lead to a deeper understanding that would be impossible with just experiments alone. In this specific casr too, it also meant that the researchers did not need as many of the piebaldic animals as they would have had to used if just using an experiment model alone. Using a mathematical model therefore can cut down a lot on time and funds needed. However, my favorite part of this research article was definitely learning about cats! If you can’t tell, I’m a cat lady! In fact, the picture used for this post is my furbaby Mimi, who herself is a tuxedo kitty.
Posted by Unknown at 11:00 PM