Scientists from The Scripts Research Institute have identified a suppressor gene in Drosophila brains. According to these scientists, drosophila are a recognized substitute for human brain and memory studies.  One researcher, Ron Davis, collected and screened about 3,500 fruit fly genes, and they observed several memory suppressor genes that the brain uses to filter information.  The gene also allows the brain to differentiate important memories from less important ones.  When a specific gene was identified (DmSLC22A), it was removed from the drosophila genome.  The researchers noted that flies' memory capability nearly doubled.  Davis stated, "The fact that the gene is active in the same pathway as several cognitive enhancers currently used for the treatment of Alzheimer's disease suggests it could be a potential new therapeutic target." So, Davis asserts that the gene could help enhance memory of Alzheimer's patients.  It may seem that drosophila and humans are too evolutionarily different from one another, but according to Davis, memory processes are still relatively similar between mammals and fruit flies. 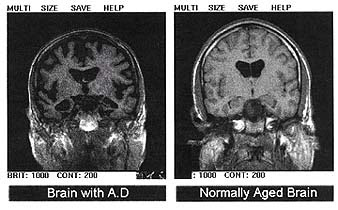 Alzheimer's disease is a fatal disease that has a genetic component.  Early Onset Alzheimer's Disease can be caused by single-gene mutations on Chromosomes 1, 14, and 21.  When the mutations manifest themselves, they cause abnormal proteins to be created.  When the genes are working normally, they work together to create amyloid precursor protein.  However, when the mutated genes are turned on, amyloid precursor protein cannot be made properly.  The variations of amyloid precursor genes can be detrimental to brain health, and they are characteristic of Alzheimer's disease.

Advances in Alzheimer research are a great achievement in medicine.  However, I am somewhat skeptical of the validity of the Davis study.  While Davis states that humans and drosophila have similar memory processes, I think that claim may be too bold.  Humans and drosophila are extremely far apart evolutionarily, and I find it hard to believe that our brains function that similarly.  However, any findings in Alzheimer's are welcomed, and they should be explored further.  If the research proves to be accurate, this could be a major step forward in preventing memory loss in patients afflicted with the disease.
Posted by Unknown at 5:22 PM