A scientific study published in Cell Reports just a few days ago shows that when 160 fruit flies are administered lithium in doses ranging from 1-25 mM, their lifespans lengthen significantly, they demonstrate a higher level of stress-resistance and detoxification, and a lower level of diet-induced hypertriglyceredemia (which can lead to obesity and sedentary habits).


Before going into more in-depth parts of the study, you might be wondering why this study was done on fruit flies. For a long time, fruit flies have been used in various genetic experiments because they are one of the most popular 'model organisms' for many reasons: They're inexpensive to obtain. They reproduce very quickly, bearing a large number of offspring. While they're much smaller than us, their genetic system is similar to a human's. They have easily observable versions of (phenotypic) traits, like sex or eye color. They're easy to manipulate, and compared to other animals, there are minimal ethical concerns surrounding experimenting on fruit flies.

While lithium is known to have positive effects on health and lifespan, the flies weren't just administered this drug. A protein kinase, glycogen synthase kinase-3 (GSK-3) was inhibited, while erythroid 2-related factor (NRF-2) (a transcription factor nuclear factor) was activated. The lithium was administered through food. Each element used in this experiment, with varying levels, results in interesting findings.

When scientists combined high NRF-2 levels with genetic loss of a certain protein (Keap1), the flies expressed increased levels of stress resistance. When low levels of NRF-2 were used, flies expressed a longer lifespan. Lithium in low doses (1-25 mM) also increased their lifespan, but higher doses of 50-100 mM resulted in a shortened lifespan. As the graphs below show, extended lifespan had no discrimination to the flies' sex or genes: 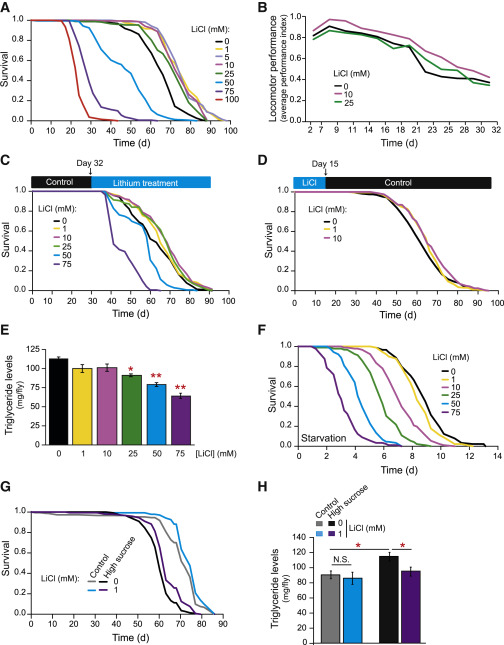 
This is exciting news for us. In their paper, the authors discuss positive effects this has in the medical field:


"The discovery of GSK-3 as a therapeutic target for aging will likely lead to more effective treatments that can modulate mammalian aging and further improve health in later life...The effects of lithium on Drosophila aging have previously been inconclusive, with demonstration of both positive and negative effects on survival...These findings demonstrate an alternative genetic and pharmacological target for the promotion of longevity and stress resistance, and emphasize the potential of pharmacological inhibitors of GSK-3 as viable anti-aging treatments." (Castillo-Quan et al. 2016)

I am very interested in Drosophila genetics, and this was a great experiment that may lead to a new drug for humans that promotes longer lifespans, lower triglyceride levels, a higher resistance to stress, or all three! While drugs like metformin and rapamycin already promote health benefits and a longer lifespan, this experiment may incite so-called 'drug re-purposing' that would give us an even better drug that does the same thing. Hopefully in the future, similar experiments to this one are done, maybe increasing the sample size or administering different drugs/introducing alternative factors to increase the positive effects shown in this experiment.