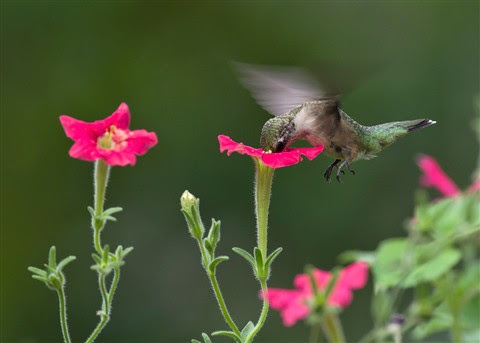 An international research team has discovered the mutations of the MYB-FL gene and the role it plays of floral UV absorbance and coloration in petunias. The MYB-FL gene is a single gene that accounts for the attraction of nocturnal pollinators. The variation of the gene allows for the fluctuations of Flavonol and anthocyanin. Flavonol controls the dimming or stimulation of the UV light intensity while anthocyanin is a pigment compound that controls flower color.
The mutation of the MYB-FL gene could mean the difference between which insect/animal pollinates the plant’s flower. Researchers found UV and pigment differences among three different petunia flowers correspond to differences in their pollinators. Some nocturnal moths had tended to draw near flowers with much UV absorption, such as the white flowers of P. axillaris. Bees enjoy the small, purple flowers of P. inflata. In the daytime, hummingbirds visit the bright red flower P. exserta that absorbs much less UV light.


It was interesting to read how plants can pick their pollinators. Each petunia was different in their means of UV absorption and coloration. This, of course, depended upon the accumulation of flavonoid pigments in the plants. The P. exserta, for instance, primarily attracts hummingbirds. This bright red flower draws the bird to its stigmas and stamens for pollination.
Posted by Shannon Keane at 4:47 PM