A Call to Diversify Genetics based Research 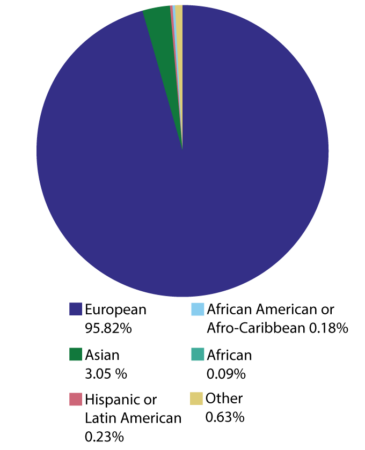 The exclusion and misrepresentation of minorities is a common occurrence seen in many disciplines of medicine and science. These exclusions are made evident in an interview conducted by Science news's editor Erin Garcia de Jesus with geneticist Tshaka Cunningham. In the interview, geneticist Tshaka Cunningham highlights the issues pertaining to genomic research both historical and currently. These issues revolved around the ethnic distribution of participants who were involved in the research trials centered on gene therapy and precision medicine. According to the GWAS Diversity Monitor, genomics research has encompassed a majority Caucasian population, which make up nearly 95% of participants. Cunningham argues that the participant distribution seen in gene studies relating to precision medicine are highly controversial and are not applicable to minority populations such as Blacks and Hispanics who represent less than 1% of participants. This argument imposed by Cunningham brings to light the disparities within genetics research, and why genetics research and advancements made in treatments of diseases is geared more to Caucasian populations. To conclude the interview, Cunningham talks briefly on initiatives he is currently making to change this disparity and encourage more African Americans to be involved in medical research. These initiatives are centered around educating more Black Americans on the benefits that their contributions as participants of research trials can serve in innovations made in the field of genetics and modern medicine.

I feel the information given by geneticist Tshaka Cunningham provides a different interpretation on the context of genetic research. His arguments purposed against the applicability of new discoveries in medicine and treatment to the Black population are both insightful and enlightening.