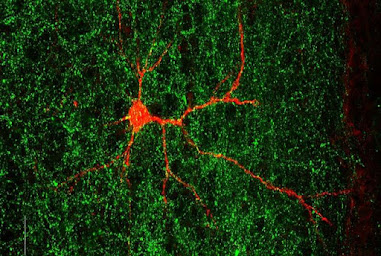 The gene GABRB3 plays an important role in early brain development and may shape the formation of normal and atypical nerve connections in the brain as described in this article. This gene is linked to a drastic increase in the risk of developing ASD (Autism Spectrum Disorder) and another condition called Angelman Syndrome. Many symptoms of these conditions can be partly attributed to atypical connections between neurons in the brain. GABRB3 encodes for part of a critical receptor protein that helps maintain order in the nervous system. It also helps determine how brain connections form during development. Testing on mice was done and determined that mice lacking the GABRB3 gene did not form the normal network of connections between neurons in the specific brain region responsible for sensory processing. These mice were also hypersensitive to touch, suggesting the neurons affected were more responsive to sensory stimuli. These results were compared to examinations of human neuroimaging data. They found a correlation between the spatial distribution of the human GABRB3 gene and atypical nerve connectivity in individuals with ASD. This research could better help diagnose and treat those with ASD or similar conditions in the future.

Posted by Jacob Sweigart at 6:58 PM