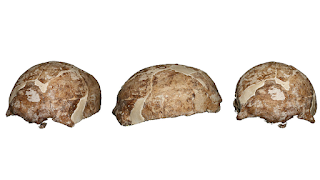 Human evolution. The history of primates, which led to the beginning of the Homo sapiens as a distinct species. According to Dr. Llamas, Dr.Willerslev and Dr. Orlando the field of human ancient DNA, also known as aDNA has become a fully genomic discipline, which is changing our concept of human history. There has been a recent discovery in the world of aDNA. Fossils of an Asian woman have been linked to early Americans. A DNA sample was extracted from the skullcap of a southwestern Chinese female. The estimated age of the fossil is 14,000 years. Geneticist Bing Su has recovered almost all of the individual's mitochondrial DNA, which is typically inherited from the mother and around three percent of the nuclear DNA, which is inherited from both parents. Using this, Su found this individual carried genetic similarities to ancient people from the Americas (~12,000 years ago) Furthermore, Su's team stratified the the identity of the woman to exhibit genetic continuity to present day populations.