Researchers found a species of Jellyfish that are effectively immortal 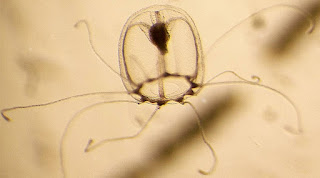 In an article written by author Veronique Greenwood, she talks about how a small species of jellyfish known as Turritopsis dohrnii, that although these jellyfish swim and eat like many other jellyfish, they have a secret that sets them apart from other sea creatures. Turritopsis dohrnii live in the Mediterranean Sea and are secretly known to turn their old age back into their young selves. For Turritopsis dohrnii, when their bodies get damaged, the mature medusas can turn back time and transform themselves to their immature life stages. To do this, T. dohrnill sheds its limbs, allowing them to drift around in the water column and morph into a polyp form, which then allows them to attach themselves to rocks, plants or other sea life. After researching the jellyfish’s genome to search for the gene that controls this unusual life cycle, the only scientist, Shin Kubota at Kyoto University in Japan, found, after sequencing the genome, is that the jellyfish had extra copies of a particular gene. These additional genes allowed the researchers to see that these genes protect and repair the jellyfish’s DNA, which is an essential aspect of their survival. To test this rejuvenation process, the researchers put Turritopsis dohrnii under stressful conditions by not feeding them. The adult medusas shrank into smaller sizes, sprouted into polyps, and began remaking their adult bodies. During this process, the scientists captured snapshots of what genes the jellyfish were using in each stage of their development. In each phase, the scientists took jellyfish and froze them to turn them into mush to extract their mRNA, which gave them records of which genes were being used to make proteins. The scientists found that in the adults, their genes were relatively active, meaning they were used more frequently to make proteins. And as the jellyfish descended into the polyp phases, their genes became quieter, making less protein to form those smaller sizes.

I personally think that this type of science is so fascinating and could possibly help for future research for humans and for other living species. If jellyfish and humans have the same genes this could lead to a new era in medicine. Since researchers were able to figure out which genes were being used for each life stage, this could be a glimpse into future research of possible cancer treatments or other treatments of human health and medicine.
Posted by Claudia Morgan at 10:12 AM