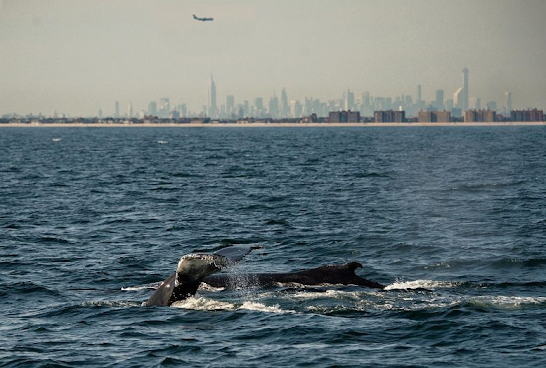 In an article posted by SciTechDaily, a team of scientists from California State University (CUNY), the Wildlife Conservation Society (WCS), and Columbia University used an emerging genetic tool to detect whales and dolphins in the New York Bight. This technique searched for environmental DNA (eDNA), or trace amounts of genetic material left behind by wildlife in the water. The results of this study were published in the journal Frontiers.

The scientists said that eDNA can be used to support other efforts to locate whales and dolphins, such as visual observations and acoustic monitoring. According to the study’s lead author, Dr. Elizabeth Alter, “Determining how cetaceans and other threatened marine animals use coastal habitats is critical to their effective conservation. By generating eDNA data in parallel with survey data, it will be possible to gain a clearer understanding of how this tool can be used in management…”

This technique also detected baitfish present in the area preyed on by whales and dolphins in addition to finding the mammals themselves. The authors claim that in the future, as technology improves, this technique could eventually be used to identify individual animals. Because eDNA drops to lower levels over time, the authors also state that additional research is needed to better understand how behavior and oceanic conditions contribute to the longevity of eDNA signals.

Though there are some signs of promising recovery for many whale populations, whales continue to face a range of modern-day threats such as ship strikes, ocean noise, entanglement with nets, and a general loss of habitat. For example, there are currently plans to scale up massive renewable energy projects to meet energy demands in the United States, including a wind energy auction for more than 488,000 acres in the New York Bight. The use of emerging techniques such as eDNA can provide a new perspective on the current status of whale populations and their prey in and around lease areas as offshore wind operations scale up along the east coast. The WCS has also extended these eDNA techniques to detect critically endangered wildlife such as Swinhoe’s softshell turtle, in the Bolivian Amazon, and in some of the most rugged areas on the planet including Mt. Everest.

Posted by Emily Zembricki at 11:44 PM