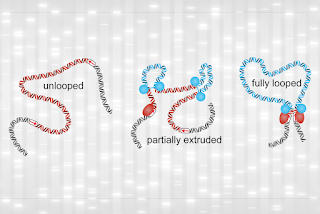 This article discusses the findings of a study from MIT which suggests that loops formed from proteins coating DNA are more short lived than previously thought. The researchers monitored the movement of one stretch of the genome in a living cell for about two hours.

These loops are formed by a process called extrusion. This is when a molecular motor promotes growth of larger loops. These experiments during this study only offered snapshots of moments in time, and offered very little information about how loops change over time.

The researchers used this method to see the stretch of the genome in mouse embryonic stem cells. If the loop was present for a 20 to 45 minutes out of the entire duration of cell division which is about 12 hours, then this fully looped state is not the primary regulator of gene expression. One of the researchers recommended that new models of DNA repair, 3D structure of the genome, and other processes are necessary. They argue that the process of extrusion is more important than having loops that are constantly extruded.

Because other loops in the genome are more difficult to study, they plan to study these loops in a variety of different cell types. This technique could offer an abundance of information about the ways in which the short span of these loops could potentially affect gene expression. There are thousands of loops and these MIT researchers only examined one during this study. There is also a relationship between the neurodevelopmental disorder FOXG1 syndrome and faulty loop formations. Using the same technique that was used during the study will allow the researchers to look at other loops. Here is a similar article.