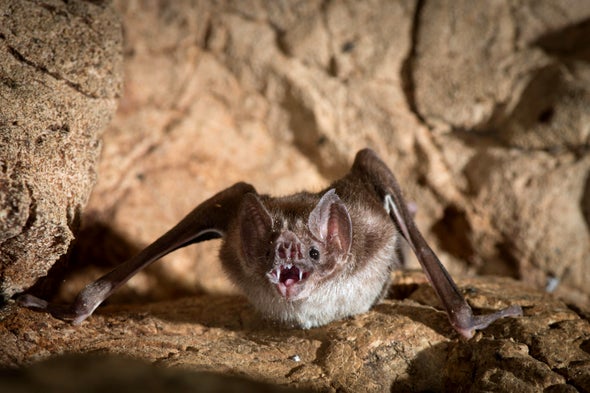 An article by Scientific American explains that a new study done by scientists in Germany have developed a possible explanation as to why vampire bats drink blood. Vampire bats are an interesting subset of bats because they only feed on blood, primarily mammals. While the species thrives on livestock blood, in other species, it is considered a poor diet.

Blood, in general, is not rich in many nutrients because it does not contain any fat or carbohydrates, and contains little calories. In order to get enough nutrients to stay alive, the bats must drink 1.4 times their body weight during a single feeding, which is 1.68 oz of blood. These levels of blood are considered dangerous because the iron levels are so high, and can be dangerous to the digestive system. Scientists wanted an answer as to how these bats only live off of blood, and if genetics possibly play a role.

Michael Hiller and his colleagues at the LOEWE Center for Translational Biodiversity Genomics in Frankfurt, Germany used vampire bat genomes to study for any possible genes (or lack thereof) to provide an explanation into this phenomenon. It turns out it is the lack of certain genes that account for their ability to only consume blood. Hiller mentions that typically, seeing a deletion or mutation in genes are areas for concern, but in this case, it is actually beneficial. 13 "key" genes have been lost and range in functions, that altogether, create the perfect recipe for the vampire bats to keep thriving on their blood diet.

The loss of two genes specifically, REP15 and CYP39A1, aid significantly in keep the bats alive and healthy. REP15 is a gene that used to help keep iron out of the bats' stomachs and transfer it into their bloodstream. With that no longer a role in the vampire bats, the iron is able to move into the intestines. However, the researchers found that this might be a good thing, as the digestive cells have a small lifespan, so they can be continually shed and replaced to help excrete the iron-rich droppings instead of allowing it to absorb in the bloodstream. CYP39A1 is another helpful loss, as it used to degrade a by-product of cholesterol digestion. This gene deletion causes the metabolite to increase heavily, and other research in rodents has shown a correlation of increased levels of the metabolite and sociability and better memory, which helps the vampire bats. All in all, this genetic research provides an answer into why this species is able to thrive on something that is not considered a nutritious food.

This article really interested me because I was not very familiar with vampire bats. I was unaware that they only drink blood and I also had no idea about the lack of nutrition that comes with consuming blood. However, the scientists' research looking into what could be responsible for allowing the bats to consume the blood was fascinating. I would have never thought that it was actually the loss of genes that helped the bats thrive over the generations. This is a very unique species with a special diet that if any other animal were to eat solely, they would die. It is interesting that genetics (or lack of) plays a crucial role in the evolution of vampire bats.

Inside the Vampire Bat Diet

Additional Research Into the Loss of Genes for Vampire Bats

Posted by Arianna Buckley at 7:56 PM