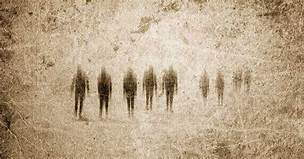 During the past population, there were three big regions (central, eastern, and southern regions of sub-Saharan Africa) that mated with each other along the way. As they were extracting ancient DNA from the bones of six individuals from eastern and south-central Africa, a big question arose. Since those regions are mentioned to be African hunter-gatherers then Homo sapiens inhabited Africa during the Stone Age. This is also covered in a new study that us located inside the article. Now there are some hints concerning the "ghost" human population. This could help us unveil that there were more ghost groups once inhabiting different parts of Africa.

Another article states, "undiscovered fossils left a genetic legacy in present-day West Africans." Additionally, this article informs that there is a high possibility of there being a ghost groups who is inhabited Africa. A big piece of information to take is that their study found that the people leaving Africa (around 60,000 to 80,000 years ago) interbred with European Neandertals. On average it is found that Neandertal DNA accounts for about 0.5% of individual Africans' genomes. Unfortunately, they have yet to discover and obtain DNA from any of the presumed 'ghost' groups that once inhabited the Earth.

Another remarkable research from Durvasula and Sankararaman states that they compared the genomes of 405 West Africans in comparison with the ancient DNA of a 44,000-yearold Eastern European Neandertal fossil and a Denisovan fossil from Siberia around 51,000 years ago. the astonishing results may be hocking because the pattern of a single DNA unit changes, or SNPs, enabled the researchers to identify areas across Yoruba and Mende genomes that were inherited from a line of ancient hominids other than Neandertals and Denisovans.

This is great evidence that can convince people even more that there might have been some ghost groups roaming in Africa around the Stone Age. Unfortunately, until solid evidence comes out to reassure them that their hypothesis is correct, we can only gather enough information that could lead us to the conclusion. There were once 'ghost' groups inhabiting Africa, as well as, mating with the other three big regions.