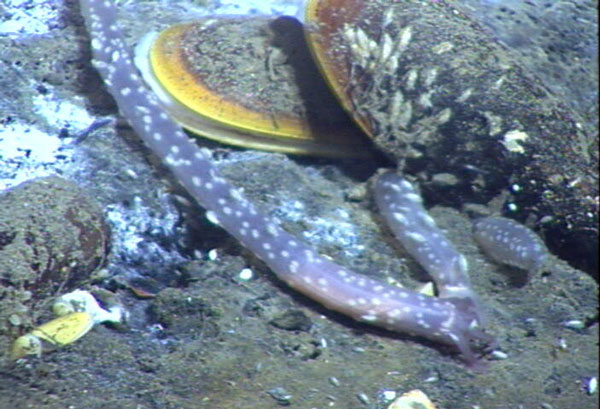 Holothurians thrive in chemosynthetic ecosystems such as hydrothermal vents, cold seeps, and organic falls. These ecosystems are characterized by high hydrostatic pressure, low temperature, lack of oxygen, and high concentrations of reducing chemicals. Unlike most organisms that rely on symbiotic chemosynthetic microbes to obtain nutrients, some holothurians do not. The unique adaptations they have are not thoroughly understood, so an investigation into the genome of Chiridota heheva, an apodid holothuroid, provides insight.
The study conducted by Zhang et al. revealed that the aerolysin-like protein family was expanded and possibly served to assist with microbe digestion. Other expanded gene families serve as adaptations to cell cycle delays as a result of increased hydrostatic pressure. These gene families impact cell cycle progression, protein folding, and ribosome assembly. Four hypoxia-related genes were identified as positively selected genes suggesting that the reprogramming of glucose metabolism serves as another adaptation. Mammals have similar hypoxia coping mechanisms which point towards convergent evolution.
This research is very important since it looks at such a unique organism. Since many of the conditions, such as hypoxia, are becoming more common with climate change, a better understanding of organisms that can already withstand such conditions may help predict future outcomes and determine possible anthropogenic adaptive measures. The prospect of convergent evolution in responses to environmental stress also serves as valuable data for how mammals may react in the future.

What to read next: Complete mitochondrial genome of Benthodytes marianensis (Holothuroidea: Elasipodida: Psychropotidae): Insight into deep-sea adaptation in the sea cucumber