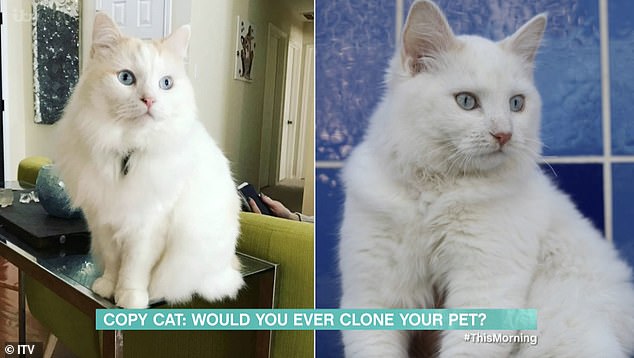 An article posted by The Washington Post goes into depth about a company called ViaGen: a pet company that works with veterinarians, geneticists, and other biologists to genetically preserve and eventually clone your pet. Specifically, this article talks about Kelly Anderson, a woman whose cat died in an accident in 2017.  After getting tissue samples from her cat Chai, ViaGen was able to clone her cat into a new one: Belle. Even though Belle (left picture) is not exactly the same cat, she has identical genetic material as Chai (right picture).

Cloning has been a big part of the genetics industry for about 25 years since Dolly the Sheep was successfully cloned. Since then, several people have used companies like ViaGen to have their pets recreated. This type of cloning is compared to wiping a phone: one the outside, the clones look identical, but on the inside, their behaviors and memories are completely different. These services cost at least $25,000 or more, depending on the animal, but the results are promising.

ViaGen uses tissue samples provided by the person who wants to clone their animal. This can be done while alive or after death, but ViaGen recommends obtaining a sample as soon as possible after death. An example ViaGen uses is during a dental exam for a pet; this way, tissue samples can be easily collected without any harm to the pet when alive. These samples are mixed in with specific enzymes to retrieve the DNA from the samples. Then, a donor animal is chosen in order to use an unfertilized egg to create the clone. The donor egg's nucleus is removed and replaced with the nucleus of the pet wanting to be cloned. The egg is then put into a mixture of nutrients typically found in a female's uterus and when they become embryos, they are implanted into a surrogate to create the clone. They are then inspected by veterinarians once born, and given to the customer. ViaGen has even gone to created the first cloned black-footed ferret, which is the first ever native endangered species to be cloned in the U.S.

I was not aware that pets could be successfully cloned. I had no idea that cloning was a popular process and that it could be done with ease. Having a replica of a pet is interesting and using these techniques for other species could help with de-extinction and genetic diversity among endangered species. ViaGen's website states that the process only takes a few months, and they can clone bigger animals like horses as well. I hope this company and others like it use this to help species thrive and to bring back animals that are helpful to the environment.

The Importance of Dolly the Sheep

Posted by Arianna Buckley at 4:11 PM