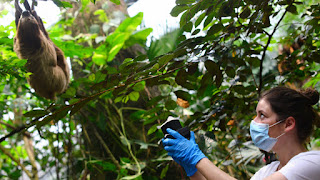 Collecting Animal DNA is a very tricky procedure of getting sufficient amounts of blood; and even worse if the animal is endangered. Now a very new technique of collecting animal DNA from air could be possible. The DNA that living things, human and otherwise, shed into the environment is called environmental DNA (eDNA). Collecting DNA from air may seem completed, since for example plants shoot pollen spores into the air. Nevertheless, the interesting thing that animals do is that they shed DNA in forms of saliva and dead skin cells. Keeping that in mind and as well as this technique is still in the works, they can collect a lot of different DNA. There is a lot of factors that still need to be revised for making this new invention very accurate, so that everyone can use it. Airborne eDNA in the wild is more dispersed, and detection may be impacted by environmental factors such as weather and wind.

What are the good affects that this new intention can bring out? First, it should be stated that all the experiments to make sure that the apparatus the science have been working on is to collect DNA from animals in a laboratory without any factors/contamination affecting it. Still what are some other good ways this can bring out. According to Live Science , "It might also be a good way to detect species that are present but rare in a given environment, such as an endangered species, she added. And it could help detect a species without interacting with it, which could have advantages." All in all, this is will be a very useful technique that when perfected, every scientists working with animals will be using this product. Just like Barnes said, "Another important step in the study of animal air DNA will be to try to collect air DNA from animals outdoors, rather than in a research lab."

Taylor, A. P. (2021, April 5). Researchers can now collect and sequence DNA from the Air. LiveScience. Retrieved April 14, 2022, from https://www.livescience.com/dna-collected-air.html