Autism May Be Revealed During Fetal Brain Scans 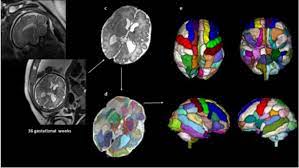 By the age of eight, about one in every 44 children has been diagnosed with autism. According to the researchers, MRI scans can detect changes in the brains of fetuses that could be early markers of a child's autism spectrum disorder diagnosis. They claim that the scans can help parents detect autism early and begin intervention programs for their children at a younger age. The researchers looked at 39 MRI brain scans of fetuses who were around 25 weeks pregnant. Later in life, nine of the children were formally diagnosed with ASD. In addition, ten children exhibited various health issues that were seen in children with ASD, despite the fact that they were not formally diagnosed with ASD. The insular lobe of the brain was found to be substantially larger in children with ASD, according to the researchers. The insular cortex is a deep brain region that is important for motor control, sensory processing, and social behavior - all of which are cognitive processes that these people must sometimes manage.

This is fascinating because it identifies very early brain abnormalities in persons on the autism spectrum and pinpoints them to a brain region crucial for emotional and sensory functioning, both of which are known to be damaged by autism. Although this is only the first stage, the research adds to our understanding of the early indicators of ASD. Given that a variety of genetic and environmental factors might influence the onset of ASD as early as the fetal stages, it's critical to discover the earliest signs of brain abnormalities in potential autism patients.

Posted by Bryan Lapsiwala at 1:46 PM