Why Strawberries Turn a Ghostly Shade of White 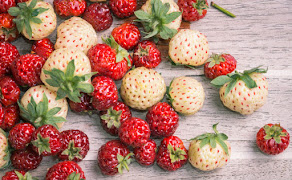 When people think of strawberries, they think of the bright red fruit we see in grocery stores, but red is not the only color strawberries can be. An article from the New York Times explains how different species of strawberries can appear in other colors instead of the familiar red. Fragaria nubicola, a species of strawberry native to the Himalayas, can appear as the typical red color or have a ghostly white appearance. The F.vesca can appear white as well with scarlet seeds. With strawberries being able to grow in a wide range of areas such as Alaska and California, it is not surprising that certain species have evolved and adapted different and unusual traits that better helped them adapt to their environment.
Patrick Edger, a professor of horticulture at Michigan State University and who the New York Times talked to in this article, studied and sequenced the genomes of 128 different strawberry species found in China (Asia being where strawberries likely originated from) to see the commonalties between species.
They found that around 45% of a strawberry's gene were shared among species meaning over half of the remaining genetic material was used to adapt a species to its particular environment. They found that the reason certain species are white is due to a gene called MYB10 that controls the production of pigments called anthocyanins. Lower levels of anthocyanins results in a paler color. They even found a new species of strawberry they named Fragaria emeiensis.
In the future, farmers and breeders could express the extra genes that can help with drought or increase yields in the commercial version of the fruit as well as other non practical purposes. Dr. Edger says that strawberries can be going in the same direction apples infamously went when their were few available options of apples and all reached a low level of flavor appeal. This research shows that farmers can express different flavors and improving on others so that strawberries do not meet the same fate apples once had.
Posted by Xavier Ramirez at 6:41 PM