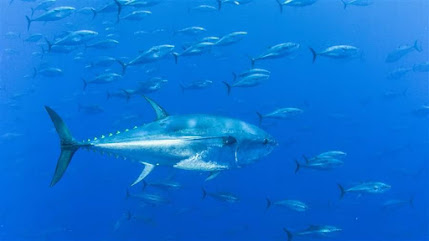 Thunnus thynnus, Atlantic bluefin tuna, are a top predator of the ocean that are highly migratory predators. Atlantic bluefin tuna (BFT) have two populations found within the Atlantic Ocean and both stocks are known to have slow maturation and long-life cycles. The two stocks are large populations of BFT that spawn in the Mediterranean Sea known as the eastern stock and the smaller population that spawns in the Gulf of Mexico known as the western stock. Both stocks feed on similar feeding grounds and the populations are known to mix. BFT population abundance in the Mediterranean Sea has fluctuated since the 16th century due to different pressures like overfishing and climate change. This study looked at BFT contemporary DNA, 2009 to 2012, and archival DNA, 1911 to 1926. SNP genotyping was used to compare archival DNA to modern DNA to see if the pressures of industrial fishing have influenced the genetic diversity of BFT. There were 92 SNP loci that were used to differentiate the loci of the populations and their biological function. It is known that the pressures of overfishing have direct influence on the abundance of BFT populations, but the evolutionary potential and resilience the genetic change has little information. The results found no significance in the differences of the genetic diversity from the SNP. Overfishing does not appear to create bottlenecking or allele loss in BFT populations, but this could also be due to high spawning rates for generations even during significant decreases in biomass, which makes it difficult to see trends of bottlenecking. The unknown stock mixing of eastern and western stocks in possibly new Atlantic spawning grounds leaves an unknown gene flow, which is not the same for all species. The SNP loci might not have shown changes in genetic diversity due to BFT having large population sizes of two different stocks as well as a slow maturation rate. BFT also have a long life-cycle meaning mature BFT will be able to spawn many generations year after year creating similar generations BFT.