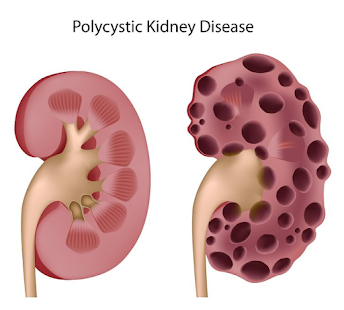 ADPKD stands for Autosomal Dominant Polycystic Kidney Disease. This disease is autosomal dominant which means only one allele is needed for the person to be affected. ADPKD causes kidneys to have fluid-filled cysts that result in inflammation and scarring of the kidney tissue. This impairs the function of the kidneys, and the two genes responsible for this disease are the mutant genes PKD1 and PKD2. The function of the proteins that come from these genes is unknown. Researchers believe the function of these enzymes is to transmit chemical signals from outside the cell to the nucleus of the cell.

Stefan Somlo MD. and his research team did some experiments on mice models. They inactivated the PKD2 gene and then reactivated it in the mice. They found that the mice developed cysts at first and when they did "gene therapy", the cysts of the kidneys shrunk and the tubules gained their natural form. This demonstrated the plasticity of the kidney and they repeated this experiment for the PKD1 gene. The researchers concluded that the re-expression of this gene showed potential regenerative abilities. They are evaluating which molecular pathways are activated when the disease is reversed to determine the best possible treatment for ADPKD.