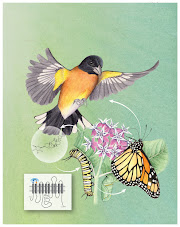 Monarch butterflies are famous for their beautiful colors and their long migration patterns. They are also well known for being poisonous due to their consumption of the milkweed plant. A genetic mutation found in monarchs block the plant’s toxins while also allowing said toxic to accumulate in the insect. This mutation is found in 3 copies of a gene for the sodium-potassium pump and is critical to the monarch’s ability to tolerate the toxins of the milkweed found a group of researchers two years ago. This mutation, along with the monarch’s warning color has helped as a deterrent to hungry predators.

However, monarchs are not the only species that can tolerate the milkweed’s toxins. This article shows that four different predators of monarchs were recently discovered to have the same genetic mutation that monarchs have. These organisms are the black-headed grosbeak, the eastern deer mouse, a tiny wasp that parasitizes monarch eggs, and a nematode that parasitizes monarch larvae. All four organisms have at least one or more copies of the gene. The black-headed grosbeak and wasp has evolved single-nucleotide mutations in their sodium pump gene in two of the three locations where monarchs evolved the mutation. The eastern deer mouse and nematode have their changes in all three locations. Noah Whiteman, evolutionary biologist and member of the study, noted that this might be the first time we are seeing the same resistance mutations that have been found in the second and third trophic levels that evolved due to the second trophic level’s ability to feed on toxic plants. The team suspects that there are other organism in the food chain that begins with the milkweed that also have the same mutations found in monarchs.

Posted by Xavier Ramirez at 8:24 PM