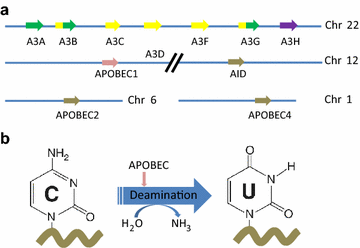 APOBEC3 also known as A3C is a deaminase enzyme that creates mutations in nucleic acid chains, primarily in pathogenic RNA that infects the human body. This protein creates a cytidine to thymine mutation in RNA to prevent the replication of viruses. This article states a study done on liver cells that were cotransfected with this protein and hepatitis B virus.  Western blotting was utilized to identify the A3C proteins in the transfected cells and was also measured in mock vector control. The mock vector control only had the virus treatment but not the A3C protein, so the protein had to be expressed endogenously. This mimics actual liver cells when the virus invades it. Western blot demonstrated that when it is exogenously expressed (treated with A3C), the protein is identified. The vector control without the treatment of A3C displayed no protein.

The mock vector control was tested for mRNA presence of this gene to see if it had the potential to make the gene. The researchers were trying to test if the gene was at least transcribed, and had the potential to translate the protein. The study showed that A3C had the highest expression in the endogenous mock vector control group. The study concluded that A3C is the most important protein that is expressed during a viral attack of the human body.

Posted by Mueed Hossain at 8:04 PM