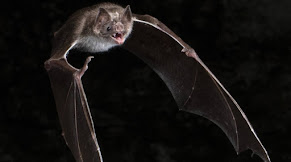 Vampire bat’s diet consist solely, as their name implies, of blood. Blood, despite high in protein, is low in sugar, fat, and nutrients. This articles explains how a group of researchers performed a genome sequence analysis on the common vampire bat, Desmodus rotundus, and compare it with 25 other bat species to see if anything in the DNA can explain how vampire bats can sustain themselves on their unique diet. It’s was found that the common vampire bat was missing 13 genes found in the other bat genomes. Losing a gene means that a species does not have a functional copy of that gene anymore. This can happen in two different ways: either by having the gene completely removed from the genome or by having remnants of the gene with the reading frame being destroyed so much through frame shifts, early stop codons, and other mutations that the gene is not going to be coded for a functional protein.

3 out of the 13 missing genes were previously identified as having been lost by the vampire bat from another study that are associated with losses of taste receptors for sweet and bitter flavors. According to Huabin Zhao, author of that previous study, gene losses often follow dietary specializations when the gene is not needed in the daily life of the animal. The other 10 genes have not been previously reported including two that are involved in boosting insulin secretion. This is perhaps because insulin is not needed as much giving their low sugar diet. Another gene lost is one involved in inhibiting trypsin, an enzyme that helps in protein digestion and absorption. High levels of this enzyme would help vampire bats digest their protein rich diet. On the opposite end, they lost a gene, REP15, that is associated with boosting iron excretion preventing them from becoming poisoned by the metal, which is abundant in blood.

Not all lost genes are related the bat’s diet but also it’s social behavior. Vampire bats are smart and social animals. They are known to share blood meals to roost mates facing starvation especially to those that shared their meal with them before. This behavior could be attributed to their lack of a gene that degrades 24S-hydroxycholesterol, a cholesterol metabolite known to play various roles in brain development, which means the bats have higher levels of metabolite in their brains. A study shows how this improve spatial memory in mice and could help explain their impressive social memory skills.

Posted by Xavier Ramirez at 9:26 PM