How Bumble Bees Get Their Iconic Stripes 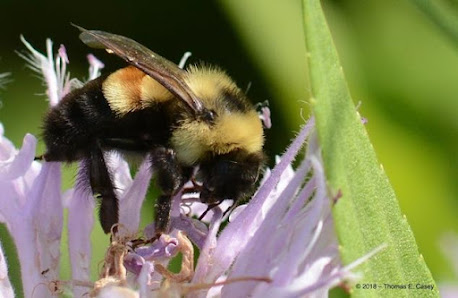 A recent study published by researchers at Penn State have found the genetic pathways that give bumble bees their signature look. Although many people associate black and yellow with those in the Bombus genus, there are at least 250 species across the world. Across these 250 species, there are an estimated 400 different color patterns that include blacks, whites, oranges, reds, and yellows to warn predators to stay away. Previously, these researchers explained that a major developmental gene, called a Hox gene, activates a "complex set of downstream genes" that drive the pigmentation changes. But they couldn't quite nail down how the change in the Hox gene led to pigment changes.

To figure this out, they looked at which genes were being targeted by the Hox gene. What they found was that by targeting the next major developmental gene, several melanin genes could be altered to reinforce the color traits. Their work also contributed the understanding of genes involved in making the red pigment called pheomelanin. Once thought to only occur in vertebrates (and in humans with red hair!), it was recently found in insects as well. By understanding how these bumble bee pigmentation genes develop, more research can be done on their diversification and evolution.

Posted by Christina Fisher at 1:14 AM