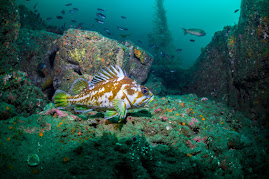 Even within closely related species, fish can have a wide variety in lifespan. One such example is the rockfishes, a genus (Sebastes) that is found along Northern-Pacific coasts. The species, Sebastes minor, has a lifespan of around 11 years while the rockfish species, Sebastes aleutianus, can live more than 200 years. An article explains how a group of researchers examined the genomes of 88 species of rockfishes to see how some species in the genus can live to such long lifespans. They found that the group of rockfishes that can live for over a 105 years have 16 genes that are involved in the enrichment of DNA replication, repair, and maintenance with 5 of those genes exhibited selective signatures in more than one species of rockfish. These genes include WRAP53 and DCLRE1B which are involved in telomere maintenance, and FEN1 which is involved in base excision repair. These group of fish also have more copies of genes that are involved in dialing back the immune system suggesting they are more protected against the effects of 'inflammaging,' an increase in inflammation throughout the body that occurs in most vertebrates including humans.

Posted by Xavier Ramirez at 4:29 PM