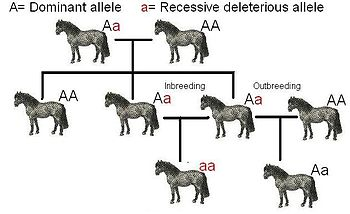 In our society today the term "inbreeding" is typically only used when it pertains to animals. For example, a dog having blue eyes is a recessive trait to the dominant brown eyes. The most efficient way to reproduce a generation of dog offspring with blue eyes is breed a male and female dog that carry the blue eyed phenotype, meaning they are homozygous recessive for it. As illustrated in the flow chart, it is possible for an offspring to inherit the homozygous recessive trait from parents who do not physically show it. These are the risks that are posed when inbreeding occurs amongst humans. Hypothetically, imagine the recessive trait in this instance was a chronic auto-immune disease, skeletal abnormality, or chronic genetic disorder. According to a study done in 2011, inbreeding practically doubles a person's susceptibility to inheriting a genetic disorder. If a person were to mate with someone outside of their family gene pool, if they do not carry the recessive trait for the unfavorable disease the offspring can resist being born with that phenotype.

There are many undesirable traits that put an offspring at risk when inbreeding. The offspring is susceptible to reduced fertility, birth rate, and immune function. They also have increased risk of cardiovascular disease, facial asymmetry, and risk of genetic disorders. The rates of child mortality is higher, and the growth of the human body as an adult is smaller. The most common genetic disorders that inbreed offspring face are schizophrenia, limb malformation, blindness, congenital heart disease, and neonatal diabetes.

Posted by Drew Broesler at 3:24 PM