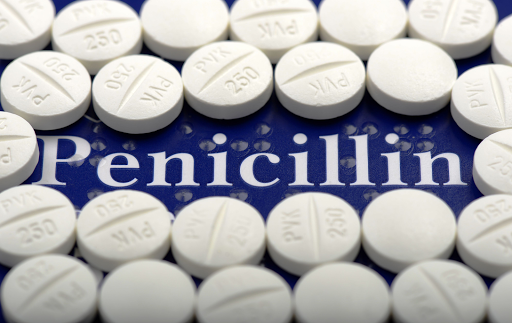 Penicillin is a common antibiotic used to treat many common bacterial infections. The problem is that so many people are allergic to it, that it's not as commonly prescribed anymore. Usually, doctors more often prescribe amoxicillin, which can treat a wider broad of infections. Onwards, penicillin has been shown to a genetic variation link on HLA-B*55:01. This a specific location on chromosome 6. This is a variant of HLA-B which has other variants shown to cause adverse reactions to abacavir which is prescribed for HIV/AIDS treatment. Also, the medication, allopurinol, used to treat gout. Scientists find that this discovery is reasonable since it seems that the HLA-B predisposes for a higher risk in drug reactions.

The HLA-B genetic variation allows for the body cells to be able to distinguish between harmful bacteria and viruses. While the HLA gene, known as human leukocyte antigen, has been studied to show that people with genetic variations of the HLA have negative reactions to medications/drugs.

Overall, this information would be very useful to people. This is because some people also have such adverse reactions to medications that it can lead to long-term negative effects or even death. If being able to have this information widely available to people about predispositions to certain drugs and the adverse effects it may cause, then people can know what to avoid them.

I found this article very interesting. I work in a pharmacy and see how medication allergies are handled. Most people misreport allergies, as the side effects that can come from taking the medication. My pharmacist has to council patients daily, on certain medications and then most of the time comes to find out they reported having an upset stomach as their allergy symptom or even a rash, which can be a side effect or allergen. Now, of course, to prove if you have allergies to certain drugs it is not the easiest to get allergy tested by a specialist. But still, if studied further, it would be more important to study patients with confirmed allergies to get more accurate results, if the HLA-B*B55:01 really does affect allergy and effectiveness towards penicillin allergies.

Posted by Alexandra Urbanek at 9:58 AM